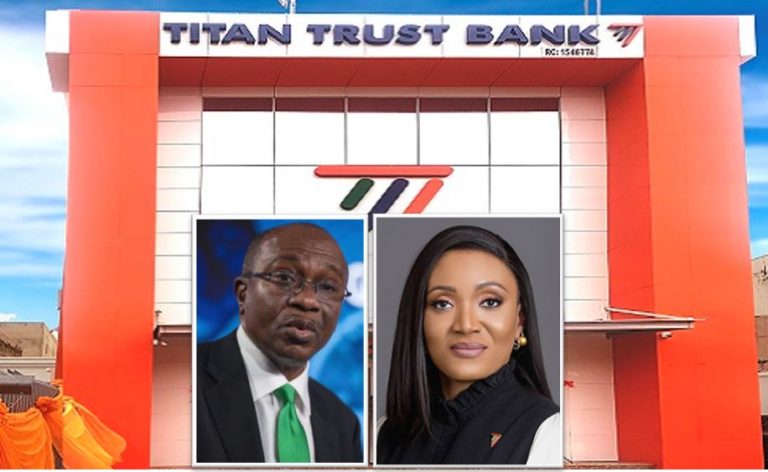 Agreeably, miracles still happen in this ‘wonderful’ part of the world, however, it is also a fact that Titan Trust Bank’s sudden rise to the point of acquiring Union Bank Plc, a massive banking brand with a whopping significantly large asset size of about $4.9 billion (N2.59 trillion) according to its FY 2021 audited financial statements, remains a mystery and an algebra without mathematical solution.

Union Bank disclosed the anticipated transaction in a corporate disclosure filed with the Nigerian Exchange on December 23rd, 2021, after its main investors decided to sell their 93.41 percent holdings.

Titan Trust Bank is barely three years, more so, the bank is just finding its feet in the highly competitive Nigerian banking industry. As such, some people wondered where it could possibly get funds to facilitate the planned acquisition, while others keenly waited to see whether the acquisition could actually come to fruition.

On June 6 2022, the African Export Import Ban (Afreximbank) announced that it had disbursed the sum of $300 million to help complement the total amount needed by Titan Trust Bank to finalise the acquisition of Union Bank. Afreximbank noted that the said fund was disbursed under its Intra-African Investment Financing Facility.

But from all calculations, it appears as if all the companies involved in acquisition have not exactly disclosed how much it had actually cost Titan Trust to acquire Union Bank. As we pointed out earlier, Union Bank had a total asset value of $4.9 billion as of December 2021.

So, even with the $300 million from Afreximbank, a lot more money would have still been needed to facilitate the deal. And it’s most likely that Titan Trust secured funding from other sources besides Afreximbank which it deliberately refused to mention.

The above analysis given by Media among a number of other factors corroborates public opinion that obviously Titan Trust Bank is favoured by an influential individual or persons whose vested interest is covertly hinged to the success of the bank.

Who Owns Titan Trust Bank?
The above is a question most netizens including those in the banking industry have been asking since Titan Trust Bank miraculously acquired Union Bank.

However, according to an ongoing investigation by The Press Nigeria, current Central Bank Governor Godwin Emefiele is the owner of Titan Trust Bank and has allegedly put it in the hands of his cronies to run.

Also, there are also strong indications that the CBN Governor who is also allegedly among the highest shareholders in Union Bank Plc may have played major role in the acquisition of the bank’s shares by TTB.

According to reports, CHI Limited, the creator of the iconic Chivita products, was one of TGI’s most notable enterprises, which was finally sold to Coca-Cola in 2019.

Titan Trust Bank: Other compelling factors and unanswered questions raised by pundits:
Union Bank was stabilized and recapitalized thanks to a N300 billion injection by FGN. This position can be confirmed by the Federal Ministry of Finance and the Central Bank of Nigeria (CBN).

AMCON injected another N239 billion into the bank to purchase out the bank’s bad assets.
How did FGN end up with 21% of the bank and Union Global Partners (a foreign investment entity) with 64% when it only invested N78 billion ($500 million At N155/$) in 2011?

The Bank was eventually sold for a fraction of its original value.
Is the National Aeronautics and Space Administration (NASS) aware of these concerns?
During the deal, Tunde Lemo was the CBN’s vice governor. Is he allowed to be linked with the acquisition of this same intervening Bank as a benefactor under corporate governance provisions?

In 2011, Union Bank was a group of seven firms, but it has since been reduced to only one commercial bank.

Without recourse to the FGN, an entity

Where did all of the subsidiaries and/or other assets go?

Who got what claim and on what conditions/approvals?

Faruk Gumel is the current Chairman of the National Security Agency (NSIA), a government agency, as well as a Group Executive Director with TGI, the majority stakeholder in Titan Bank, the new owners of Union Bank. Is this a transaction that falls under the definition of “arm’s length” as defined by Nigerian corporate governance?

Perhaps the President and Commander in Chief, as well as the NASS leadership, should raise these and other questions. The answers should come from the CBN, AMCON, the Federal Ministry of Finance, and Mr. Emeka Emuwa, the former Managing Director of Union Bank.

Clearly, the fact that Titan Trust Bank, a small bank with only two bank branches in Lagos, can almost effortlessly swallow up Union Bank, a 104-year-old bank, in a transaction valued in the region of about $1 billion dollars or above, defies common sense and suggests a case of “the hand of Esau, but the voice of Jacob.”

Only Two weeks ago, it was announced that Atlas Mara and other core investors in Union have successfully finalised their proposed sale of 93.41% stake.

Following the acquisition, Titan Trust Bank quickly took over the 105-year-old bank, appointed new board members and replaced some top executives. And some people were really interested in knowing how the 3-year old bank pulled it off. Where did it get the money? Many had asked.

According to information available to report, Emefiele through one of his closest ally, Adaeze Udensi perfected the ground works for the establishment of Titan Trust Bank as well as its acquisition of Union Bank.

“Adaeze is positioned as the face of TTB for a reason. She was there from inception in 2019 and she has been a tool in the hand of Emefiele even right from her days at Zenith bank”, our source said.

We are made to understands that Adaeze Udensi was the only Executive Director of Titan Trust Bank and wielded so much influence; more than the former Managing Director, Mudassir Amray, who stepped aside after the complete acquisition of Union Bank days back.

We can confirm that Adaeze Udensi is the current Acting Managing Director of Titan Trust Bank as of the time of filing this report, and some insiders said that they were not surprised, “after all, that was the grand plan from the start,” the source said.

Emefiele’s camp has continued to deny his participation with Titan Trust, but their evasive denial without adequate explanation is reminiscent of a similar situation that occurred when the CBN Governor’s desire to run for President in 2023 was exposed by the platform months back.

Even though all the evidence pointed to our report’s veracity, he continued to dispute the news.

It wasn’t any different this time. comments from CBN spokeswoman Osita Nwasinobi, as expected, denied Emefiele’s involvement with TTB and quickly hung up to prevent any further questions.

More on this be on the look out.

Social Media Influencers Stage Upset Against APC, PDP and LP Ahead of 2023 Presidency