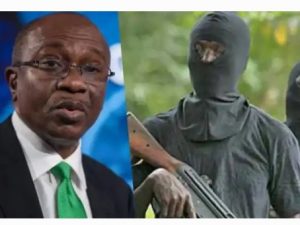 A group of armed men that claimed to be from the oil-rich Niger-Delta has endorsed Godwin Emefiele for president in 2023.

The so-called Niger Delta Freedom Reserve Force said the CBN governor is the only credible politician with the capacity to resolve Nigeria’s myriad crises if elected next year, according to a propaganda video the group circulated on Thursday.

The video showed six men, clad in white hoods, holding heavy firearms as they made their demands.

“We are tired of recycling politicians in the system,” the group said. “We have settled for the governor of Central Bank of Nigeria, Godwin Ifeanyi Emefiele. If he is truly contesting, and the rumours are true, we believe that he will bring meaningful development and help the country get back on its feet.”

The group, which had no prior break in public discussion, said it is not a force against the Nigerian government or a separatist group. The men, however, pledged to quote “surrender our arms” if Mr Emefiele emerges as the presidential candidate of the ruling All Progressives Congress.

A spokesman for the CBN did not return requests seeking comments about whether or not the governor had seen the video and his position about it.

Mr Emefiele has been making movies to join politics and contest the 2023 presidential election as a member of the ruling All Progressives Party, raising questions about the dire economic consequences of his unprecedented moves.

But three weeks to the primaries of major political parties, Mr Emefiele has yet to publicly declare his 2023 interest, which would force his resignation. Last month, what seemed like campaign vehicles bearing the governor’s picture surfaced online.

See also  Alcoholic Drinks We Seized Were Given To Police, Says Hisbah

Exposes: My Mother Uses Deadbody Water To Prepare The Foods At Our Restaurant