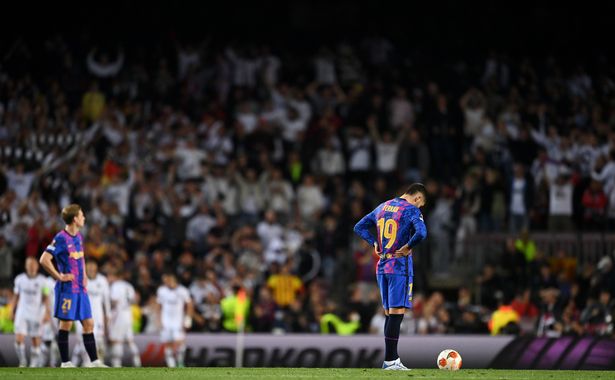 Barcelona were left humiliated in a heavy Europa League defeat against mid-table Bundesliga outfit Eintracht Frankfurt at the Camp Nou.

The German side, who languish in the ninth spot in La Liga, tore the Catalan giants to shreds in a hugely impressive performance to secure their place in the semi-finals. Filip Kostic netted twice for the visitors on either side of a stunning long-range strike from Rafael Santos Borre.

Kostic gave Frankfurt the fourth-minute lead from the penalty spot after Eric Garcia pulled Jesper Lindstroem to the ground and after the German side spurned multiple chances, Santos Borre deservedly doubled their lead with a goal-of-the-tournament contender.

Midway through the second half, Kostic added a third with a powerful left-footed finish into the corner and after Frankfurt spurned more chances, Barca launched a late rally. Sergio Busquets had a goal ruled out for offside in the 84th minute and as the game ticked into injury time, the midfielder scored a scorching effort to set up a dramatic injury time.

The drama continued as Memphis Depay scored a penalty in the 11th minute of added time to reduce the score to 2-3 while the visiting side’s defender Evan N’Dicka was dismissed for a second yellow but Frankfurt held on to claim a deserved victory. Here are five talking points from an evening of high drama in Barcelona.