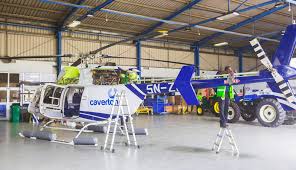 Caverton Offshore Support Group, an oil and gas logistics firm, has lost its Chevron contract to Bristow Helicopter, and this is expected to negatively impact its dwindling revenue for the second quarter period of 2022.

According to a source who spoke with Ripples Nigeria, it was gathered that Caverton Helicopter, the subsidiary of Caverton Offshore, allegedly lost the contract due to its poor maintenance culture for its helicopters, amongst others.

This revelation comes weeks after one of Caverton’s helicopters in Cameroon went missing on May 11, with two pilots and nine passengers losing their life in the incident – Caverton is yet to publicly disclose the reason for the crash.

Ripples Nigeria learnt that Chevron in some cases, took over responsibility for the maintenance of the helicopters which Caverton uses to fly its personnel to oilfields and onshore.

The poor maintenance issue and bad helicopter made it impossible for Caverton to meet up with demands, such as conveying Chevron personnel to requested locations, resulting into the latter contracting Bristow.

Aside from its Helicopter issue, the source said Caverton has been struggling with wage payment, and with the contract loss expected to make the workers in charge of the Chevron logistics redundant, the oil & gas company mandated Bristow to absorb them.

The contract lost to Bristow is a blow to Caverton’s financial capability, having secured about $17 million to finance the Chevron contract, according to documents filed with the Nigerian Exchange Limited (NGX).

See also  South African Data Suggests Omicron Gets Around Some, Not All Immunity

Ripples Nigeria understands the loss doesn’t portend well for Caverton’s earnings in Q2 period this year, having already suffered -2.55% drop in its Q1 2022 turnover, which was N7.95 billion, in contrast to the N8.15 billion of Q1 2021.

It’s operating profit had also been on a decline, settling at N2.33 billion in the first quarter of this year, failing to surpass the N3,19 billion generated in the corresponding period of Q1 last year.

Amid the struggles of Caverton, investors in the company have been exiting their funds in the company, with the massive sell off resulting to shareholders investment in the firm dwindling by -33.72% year-to-date, according to Ripples Nigeria analysis.

The bearish run has wiped off N1.94 billion from Caverton’s market capitalisation, which now stands at N3.81 billion as of Tuesday, below the N5.76 billion it started the week with, as the sell off among investors weakened its share to N1.14kobo, down from N1.72kobo.

Caverton has not responded to enquiry on the contract termination, poor maintenance culture and unpaid salary in the organisation.