Exposes: My Mother Uses Deadbody Water To Prepare The Foods At Our Restaurant 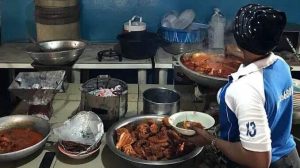 A lady has anonymously opened up on her mother’s wickedness and greed as to how she uses voodoo to push the sales at her chop bar and also retain all her customers.

As confessed by the lady, her mother uses corpse water to prepare the foods she sells and also buries some human body parts around the premises of the chop bar on a regular basis.

She detailed that her mother also travels to Togo every 21 days to make sacrifices to the deity she serves to keep her business booming.

The worried lady who sounded very guilty in her writeup further revealed that she feels sorry for her mother’s customers because most of them became broke after they started eating from their chop bar.

Now, the lady doesn’t want to take over her mother’s evil practices but the evil mother insists if she fails to follow in her footsteps, a huge catastrophe is going to hit the family.

Keep me anonymous sir.
My mom owns a bar at East Legon. It’s been operating for over 15years and we are rich. Mom has a lot of money right now, we all studied studying abroad and have our own cars, houses and all. I am the first child and only daughter among two boys.

She wants me to take over the business because my brothers are into something else but I can’t. Mom uses charm and I can’t do it. Herself and all of us don’t consume anything from the bar because of the spiritual implications involved. I’ve seen successful people go broke at mom’s bar.

She travels to Togo every 21 days but I don’t know what she goes to do. She’s yet to introduce that to me. So far, she has introduced me to a diener (morgue worker) who gives her parts of dead people and water used to bath them. She mixes the water used in the food preparation with that of the one used to cleanse the corpse and then bury their parts anywhere around the bar.

I feel sorry for our customers because people come there to spend so much money, some people even have to leave their cars because they’ve consumed more than they can pay. I don’t want to continue with her deeds. I wish to end it and use my qualifications to get myself a job because I studied abroad but, she said if I quit the business, it will have bad effects on us.

I don’t know what she means but she has refused to explain and is insisting I take after her. What do I do sir? Pls advise me.

Related Topics:Deadbody Water To Prepare The Foods At Our RestaurantFoodMy Mother Uses Deadbody Watershe uses voodoo to push the sales
Up Next