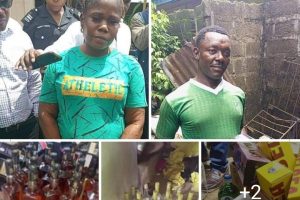 The Council Chairman of Eket Local Government, Mr Akaniyene Tommey on Tuesday led a team of security operatives on some raid Fake Drinks Manufacturers and illegal alcoholic distilleries in the local government.

Joined by the DPO of Eket Division, DSP Sunday Digha, men of the Civil Defence and staffs of the Ministry of Environment, the Council Boss and his entourage uncovered two separate adulterated alcoholic factories at Ikot Abia Village where empty bottles of different brands of alcoholic beverages, labels, empty cartons of drinks and already finished products were found in the premises.

The adulterated items were taken away by the men of the Police which according to DSP Digha, will be used as one of the exhibits against the perpetrators in Court.

Frowning at the incident, the Council Chairman charged the police to leave no stone unturned and also make sure the owners of the illegal factories are made to face the law and also charged on citizens to be vigilant and report suspicious activities in their area to security operatives.