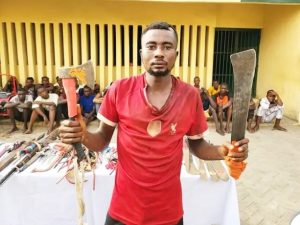 The police in Kano State have arrested 128 suspected thugs with weapons meant to steal and attack people during the just concluded Sallah celebration and durbar in the state.

Spokesman of the command, SP Abdullahi Haruna Kiyawa, disclosed this while parading the suspects at the Anti-Daba Unit of the force in Kano.

He said, “One hundred and twenty-eight suspected thugs (Yan Daba) were arrested between May 2 and 6, 2022, during the ‘Hawan Idi’, ‘Hawan Daushe’, ‘Hawan Nassarawa’ and ‘Hawan Fanisau’ in all the five emirate councils of the state.

“The suspects were arrested with weapons, intoxicating drugs and stolen property.

He further said with the help of sister security agencies and the command’s community policing stakeholders, the command succeeded in ensuring a very peaceful atmosphere that led to a serene Eid el-Fitr festivities.

Meanwhile, one of the suspects who was arrested with Indian hemp, Ayatullahi Abdurrahman (20), of Dorayi Quarters, said he was into the business to prevent himself from stealing.

He said, “I had just finished packing my Indian hemp, ready to sell when vigilante personnel arrested me. I sell only Indian hemp, and that too is to prevent me from stealing. I smoke wiwi and cigarettes, that’s all.”

KUA Africa 2022: Make Your Dreams To Study And Live Abroad a Reality With Ease