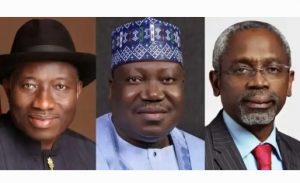 Nigeria Former President Goodluck Jonathan has condemned Nigerian legislators at the National Assembly over Section 84 of the Electoral Act and recommended the removal of the controversial section to allow political parties to decide modalities for candidates’ elections.

“The National Assembly made alterations to the electoral law, and now only what they call the ‘elected delegates’ are to elect people that would vote. Then one day, Nigerians will go to the polls and think they are voting a president?” he argued. “But who presented presidential candidates for you? Very few people at the national level, at the state level, at the local districts, at the federal and state constituencies.”

Mr Jonathan stated this at the public presentation of a book, ‘Political Party Governance’ by former Minister of State Power, Mohammed Wakil, on Thursday in Abuja.

“Give parties the leverage. The key thing is that the Independent National Electoral Commission (INEC) is regulating them. They mentor them, and the system they will adopt in selecting their candidates must be documented in their constitution and copies deposited with INEC. That is what will be used to judge that party,” Mr Jonathan recommended.

The ex-president added, “Parties are not parastatals of government, and the National Assembly cannot make laws that choke the political parties. That is my take on this controversial issue.”

Mr Jonathan also rated as low the ongoing primaries by political parties to elect candidates for the 2023 general elections because of provisions of the 2022 Electoral Act.

“We have former governors, former deputy governors, former senators and all the rest. But then, we have only one elected delegate that you don’t know where he is coming from. A delegate that will come to Abuja to select who becomes the presidential candidate. Is that the kind of democracy we will practice?” the former president said. “But those of us who have been involved know that it is terrible. Are we bringing those who really know who is who to elect these delegates or those delegates that can be bought over with money?”

FirstBank Bounces Back to its Leadership Position, Delivers a Fantastic Performance in 2021