JUST IN: Lady Arrested For Selling Her Mistress’ Baby, 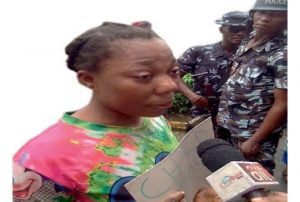 A 22-year-old lady, Blessing Okon Etim, has been imprisoned for stealing and selling a baby. Okon-Etim was jailed following a Federal High Court sitting in Calabar, Cross River State, where she was charged with one count under the provisions of Section 21 of TIPEA Act, 2015.

Hon. Justice Ijeoma Ojukwu who gave her judgement on June 7th, found the defendant guilty as charged and sentenced her to 5 years imprisonment or option of two million Naira.

The court further held that should the five months old baby who was sold to the unknown buyer be found, the sentence shall be reduced to 3 years or option of two million Naira.

Okon-Etim was arrested by operatives of the Cross River State Police Command on October 2021.

It was gathered that the mother of the newborn stolen and sold by Okon-Etim died after delivery.

Okon-Etim was asked by her mistress, who was in the custody of the newborn, to take the baby to a relative, rather she got in contact with a middle man, who helped in selling the child to someone in Umuahia, Abia State, at N150, 000.

See also  Lady Beats Mother To Coma For Sleeping With Her Boyfriend
Related Topics:Blessing Okon EtimCross River StateIjeoma Ojukwuimprisoned for stealing and selling a babyLady
Up Next

Bola Tinubu Shaky Hand During Primaries Normal Under Some Circumstances… He Remains The Best For Nigeria- Dr. Adebara