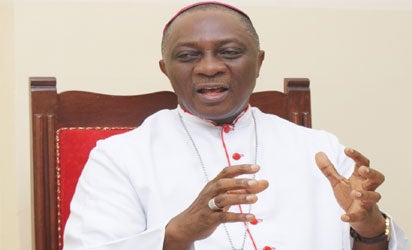 Archbishop of the Metropolitan See of Lagos, Alfred Adewale Martins, will tomorrow lead a team of bishops to Lagos for the unveiling of Logo and Mascot of the Order of the Knights of Saint Mulumba (KSM) Nigeria.

This is part of a one year bouquet of activities geared at celebrating KSM’s platinum jubilee (70th) anniversary.

The unveiling, which will hold at St Leo Catholic Church, Toyin Street, Ikeja, Lagos will be preceded by a Holy Mass to be celebrated by Martins. Afterwards, Kukah will deliver a lecture at the session.

The series of activities will hold consecutively in the nine metropolitan councils of the order between June 2022 and June 2023.

In a press conference addressed by the Supreme Knight, Charles Mbelede, in Lagos to unveil the activities, he said: “The theme reflects on before, now, and where we will be in future,” adding that the Order of the Knights of Saints Mulumba, Nigeria is a renowned group of Catholic Church faithful, founded in 1953, whose core value is to do charity.

My Govt Has Made Huge Impacts On Security, Economy — Buhari