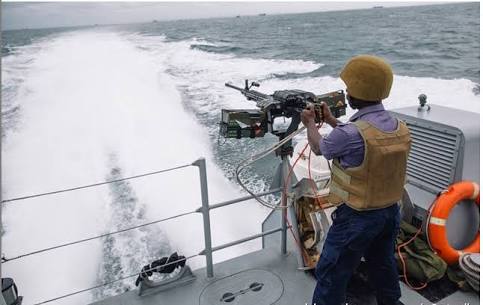 The Nigerian Navy, on Saturday, said Operation Dakata Da Barawo (OPDDB), have intercepted N613million worth of stolen crude and illegally refined Automotive Gas Oil (AGO), also known as, diesel from oil thieves and other criminals in Niger-Delta.

National public relations officer, Nigerian Navy, Commodore Kayode Ayo-Vaughan, said in a statement, the operation was an indication of the Nigerian Navy’s resolve to ensure zero tolerance for Crude Oil Theft (COT), illegal bunkering and other related economic crimes in the nation’s maritime area and the South South geopolitical zone in particular.

Ayo-Vaughan, however, warned economic saboteurs and sponsors to desist from unpatriotic and criminal acts in the region, saying N200million and $700,000 (N413m) worth of products were intercepted in two weeks.

“These arrests and seizures from the ongoing OPDDB have denied oil thieves and criminals of about N200 million and $700,000 worth of products within a period of 2 weeks. It is indicative of the Nigerian Navy’s resolve to ensure zero tolerance for COT, illegal bunkering and related economic crimes in the nation’s maritime area and the South South geopolitical zone in particular,” be said.

Giving a breakdown of the seizures made in the weeks under review, Ayo-Vaughan, said, “On 5th April, 2022, Nigerian Navy Ship (CNNS), PATHFINDER at Port-Harcourt intercepted nine huge (‘Cotonou’) wooden boats laden with unspecified quantty of legally refined AGO at Andoki, Bille and other areas within her area of responsibility.

“Additionally, Illegal Refining Sites (IRS) with cooking pots, tanks and reservous were discovered at in Ketoru Creek. The Base also arrested 2 STARZ marme BOATS DOROH 1 and DOROH 2 for providing illegal escort services within the Bonny martime area without proper approvals. Also, on 7th April 2022, NNS ABA intercepted and arrested MV ROYAL DIADEM which was laden with suspected ilegally refined AGO of unspecified quantity at Bonny area.

“The vessel was unable to provide appropriate documentation at the point of loading, hence MV ROYAL DIADEM is presently undergoing investigation. Similarly, NNS DELTA at Warri located an IRS around Opumami and Asukpo Creek laden with about 20,000 litres of suspected stolen crude oil.

However, the Navy spokesman, also disclosed that the Forward Operation Base (FOB), Bonny also destroyed a wooden laden boat with unspecified quantities of suspected crude oil while NNS SOROH at Yenagoa discovered 2 stores and assembly points used by illegal bunkerers.

“In the same vein and on the same day, FOB BONNY destroyed a wooden laden boat with unspecified quantities of suspected crude oil at Nabil creek m Rivers State.

See also  Agony As Groom Is Burried On His Wedding Day

“On the same day, the base deactivated an IRS around Egwa creek in Warri laden with 250,000 litres of stolen crude and about 30,000 litres of illegally refined AGO.

“In Akwa Ibom state, NNS JUBILEE intercepted and arrested a wooden boat laden with about 100 drums and sacks of product estimated at about 33,000 litres of suspected illegally refined AGO,” he stated

Who Is After Osinbajo?….As His Firm, Simmons Coopers Is fingered in alleged N100bn Alpha Beta scam!