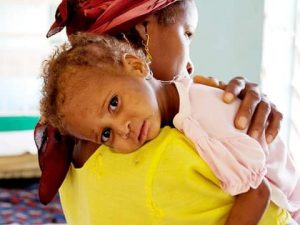 A Nigerian woman, Layomi Omowunmi has put herself and her daughter up for adoption as a result of hardship under President Muhammadu Buhari’s administration.

Omowunmi, who took to her Twitter handle on Tuesday, said she is willing to serve as a home help for anyone who will adopt her and her daughter and also take responsibility for her mother’s feeding.

The woman wrote, “Who can adopt me and my daughter, I will be doing the cleaning of the house, even if you don’t pay me just sponsor my daughter to school and also be feeding my mum, please don’t air me really need this house help work, I have never been employed before.”

Some people have offered to assist the woman and her family but some have also noted that it could be a scam or a scheme by a lazy woman to lie in order to get free money from the public, which is common in Nigeria.

However, Nigerians have suffered biting economic challenges under President Muhammadu Buhari’s regime which may not be unconnected to the lack of effective policies in the administration.

According to the Food and Agriculture Organization (FAO), food insecurity has been on the rise since Buhari was elected into power in 2015.

While data shows that demand for food has continued to increase since 2014 due to the country’s rising population, there is no corresponding growth in the amount of food production largely due to surging insecurity, inconsistent government policy, and poverty among others.

Though the government has introduced different financing initiatives to improve agricultural finance in Nigeria, and between 2018 and 2020 committed over half a trillion naira in budgetary allocation to Nigeria’s agriculture sector, none of them has shown a positive impact on the lives of Nigerians.

Also, since Buhari came into power in 2015, there has been sustained inflation in the country which has continued to make it difficult for many, particularly low-income earners, to eke out a living.

Since the inception of the Buhari administration, the cost of staple food items has continued as Nigerian households struggle to feed.