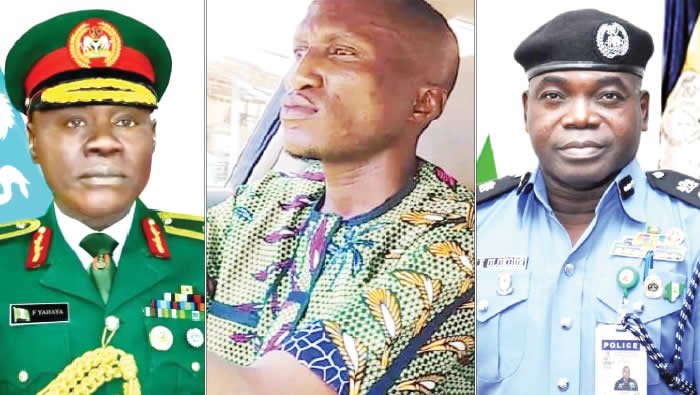 The family of a car dealer, Adeyinka Adekunle, have called on the Osun State Police Command and the military authorities to bring his killers to book after he was tortured to death by soldiers at the Nigerian Army Barracks, Ibodi, Osun State.

The victim’s father, 79-year-old Pa David Adekunle, lamented that none of the officers involved in the killing had been brought to book since the incident happened.

The torture was allegedly carried out on the orders of one Lt. Tobi Akindapo.

The Press Nigeria gathered that Adeyinka and a friend, Solomon Ogundare, went to a beer parlour at Imo, Ilesa, on Thursday, March 24.

While the duo were drinking, they were approached by three men who solicited drinks from them.

Adeyinka and his friend, however, refused, saying they did not have money to buy extra drinks.

Our correspondents learnt that the men, who were soldiers, were not in uniform.

The youngest among them, said to be in his 20s, later queried Ogundare for slacking his trousers.

Adeyinka, 37, was said to have rebuffed him, questioning his authority to correct his friend’s dressing.

The matter was said to have led to exchange of words between the two groups.

As the altercation degenerated, one of the three men made a call to the barracks and soldiers stormed the scene.

However, while Adeyinka escaped from the area, his friend was caught and taken to the barracks, where he was tortured and locked up in a cell.

A Lexus 250 car belonging to Adeyinka which he drove to the beer parlour was reportedly vandalised and towed to the barracks.

Ogundare’s sister, Elizabeth Itunu, said she spoke to the soldiers during a visit to the barracks and they demanded N500,000 for the release of the car.

She said, “The soldiers said we would have to pay the money they used to tow the vehicle. I called Adeyinka and told him their demand. He thought the soldiers would not recognise him because the fracas happened at night.

“As we were both begging the soldiers, one of them identified him and that was how they seized him and started beating him in my presence. My brother was also tortured as well.

“So, I told the soldiers that now that you have beaten them, can you allow us take them for treatment? They did not listen. Instead, the young soldier who started the fight the previous night said he had not beaten them and he would start his own the following day.

“We gathered N140,000 and I begged the soldiers to take the money and release them to us that night, and when we completed the payment, they could release the car; but they refused.”

Itunnu said she and a few other friends returned home without either Adeyinka or Ogundare, who were locked up in the guardroom.

The following day, she returned to the barracks and met the two men cutting grass as the soldiers whipped and kicked them.

“I observed that Adeyinka was very weak. He suddenly fell. They thought he was pretending and they started hitting him. When they saw that he was not moving, they checked his body and their boss said he should be rushed to a hospital,” she added.

Itunnu explained that her brother was put in the army truck, saying she later heard that the car dealer died before he got to a hospital.

“At that point, I became afraid as I saw that my brother was not breathing well. Their commander asked us to take my brother to a hospital as well.

“My brother told me that while he and Adeyinka were in the guardroom, he (Adeyinka) vomited. The soldiers then ordered him to start eating the vomit,” she stated.

The deceased’s father, Pa David, said he was informed that his son was taken to a police station when he visited the barracks.

“I went to the Ayeso Police Division and the police said they did not see any soldier. One of the policemen said I should go to Wesley Guild Hospital, Ilesa. On getting to the hospital, I was referred to the mortuary.

“At the mortuary, they said soldiers brought a corpse, but they rejected it and demanded to see a police report. They said they were forced to take the body. They brought out the body and it turned out to be my son,” he added.

He accused the Osu Divisional Police Officer, Akinsanya Ebenezer, who had jurisdiction over the matter, of attempting to bury the case.

The septuagenarian said he later reported the case at the police headquarters, Osogbo.

PUNCH Metro also learnt that the family had written a petition to the police and the army, demanding the arrest and prosecution of those involved in the murder.

“My son was buying and selling vehicles. He was my last child and my only son. He and his wife just had their first child, who is just two months old. I insist that the soldier that killed my son should be handed over to the police to face prosecution,” he added.

Akindapo could not be reached on his mobile phone, as he had yet to respond to text messages from our correspondents as of the time of filing this report.

The Osun State Police Public Relations Officer, Yemisi Opalola, confirmed that a soldier approached the Ayeso division, seeking assistance to enable him to deposit a corpse in the morgue.

She said, “But the police did not give him any operative to accompany him. The DPO only called the morgue and spoke to people there. That was the only police involvement.”

He said, “Our official position is that investigation has already commenced and appropriate action would be taken after the investigation.”

Zoning: Why PDP Is In Dilemma