High Celebrity Squard Magazine 5th Edition Out With A Bang!

Skit Maker and Actor Mr. Macaroni To Speak At 9th Edition of NECLive 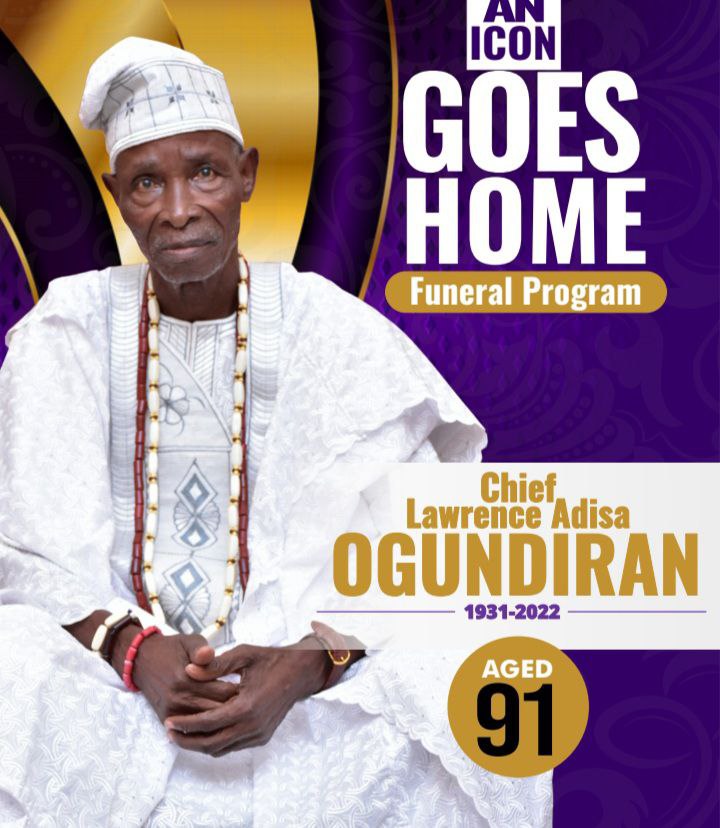 Spread the love
The ancient city of ibadan is expected to play host to very important personalities from all over the world this weekend when prof. Akinwumi Ogundiran will be burying his father, Pa Lawrence Adisa Ogundiran who passed on earlier this year.
Pa Ogundiran died on march 22nd 2022, a month to his 91st birthday.
Pa Lawrence Adisa Ogundiran , was born on April 21, 1931, to Raji Akande Ogundiran and Morounfola Asiawu in Alágbáà Odéséye hamlet, Olódó, then a rural suburb of Ibadan. He was named Lamidi Adisa. The fifth of nine children by his mother, he was the first child to survive and the only son to live into adulthood
He began his formal education at about seven years old in a madrasa learning Arabic and the Quran. At twelve, he was enrolled at Methodist Primary School, Olódó. The plans for his education were derailed in July 1947 when his mother suddenly died. He was then in his fourth year in school
Lamidi Adisa described 1947-1950 as his darkest years. He later got converted to Christianity and was baptized and called Lawrence Adisa Ogundiran. He was grieving, and the future was bleak. He continued to farm and assisted in his father’s cocoa business. He was also caring for his toddler sister. Lamidi Adisa was industrious. To make ends meet, he would weave baskets, make brooms, and collect firewood to sell in the market. After a relative took over the care of his sister, he began to search for a better opportunity. Now 18 years old, he could see his former classmates making progress in their studies while he was stuck in subsistence farming.
Lawrence Adisa was the central figure in his vast extended family. He had the privilege and burden of
being the first to acquire Western education in his family, and he became the guiding light for others.
Immediately he was stable in his teaching job.
He taught at the following schools:
1955-1956: African Church Primary School, Baale Olokemeji village, Ibarapa Division
1957: Ebenezer African Church Primary School, Orisunmibare village, Ibadan
1960: African Church Primary School, Ikirun
1964: African Church Primary School, Oluga village and many other places.
He was appointed as Assistant Headmaster at IMG Orita Aperin in 1986. He rose to the rank of
Headmaster in 1988. The same year, he was made the Zonal Head of fourteen schools in the Orita
Aperin-Aremo-Olorunsogo-Elekuro axis of Ibadan. On December 23, 1989.
He is survived by his wife of 58 years, Mama Janet Iyabọde Agbekẹ Ogundiran, the woman who saved the
House of Ogundiran-Olódó from dying out. She was his confidant and chief adviser, a fierce fighter who
shielded her husband from abuse by ingrates. She gave him the best care during Baba’s last years.
His children include Professor Akinwumi Olufisayo Ogundiran who is a Nigerian-American archaeologist, anthropologist, and cultural historian, whose research focuses on the Yoruba world of western Africa, Atlantic Africa, and the African Diaspora. He is Chancellor’s Professor and Professor of African Studies, Anthropology & History at UNC Charlotte. Others are Chief Olutayọ Akinbode Ogundiran, Hon. Olujide Akinloye Ogundiran, Mr. Akinfemi Oluokun Ogundiran, Chief Olusoji Akinyinka
Ogundiran, Mrs. Omosalewa Amope Iyanda, Mr. Akinbukola Oluseye Ogundiran (Coach Bukky), and Mr.
Akintomiwa Olukolade Ogundiran. He is also survived by daughters-in-law, a son-in-law, many
grandchildren, many nieces and nephews
The final Funeral comes up this weekend at the cathedral of St. Peter Aremo ibadan and St Paul Anglican Primary School Aremo Ibadan