Tears As Husband Beats Mother Of 7 To Death 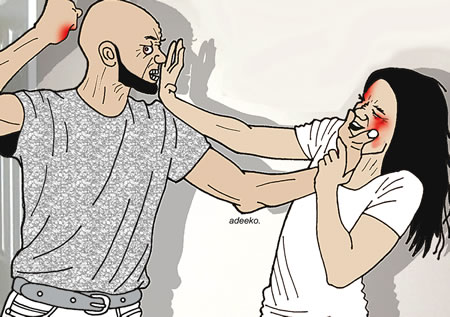 The state Chairman, Human Right Defenders (HURIDE), Sampson Oko Nweke, said the victim, who hails from Ndiechi Onuebonyi Igbeagu, had reported a case of wife battery and domestic violence to his office against her husband, Sunday Uguru on April 19, 2022, adding that there was little delay in serving notice of invitation to her husband because of an issue of invalid phone number.

He noted that the rights group tried to intervene in the matter; “on 25th of April, 2022, I spoke with the deceased on phone in the morning inviting her to our office for further action to be taken. After waiting for many hours in the afternoon, she didn’t come. I dialed her phone number which was picked by another woman who told me that the owner of the phone is dead.”

She directed us to one village clinic at Sharon junction where I saw the motionless body of Mrs. Anulika.

We went in company of a member of GBV Taskforce in Ebonyi State, Comrade Matthias Okinya. The sight of the dead woman filled my heart with uncontrollable rage and resentment, I phoned the police immediately and a detachment of Police came but the husband was nowhere to be found.

“We launched a serious search for him with the assistance of concerned villagers and later got him apprehended. He is currently in police detention while the corpse has been deposited in the morgue,” he said.