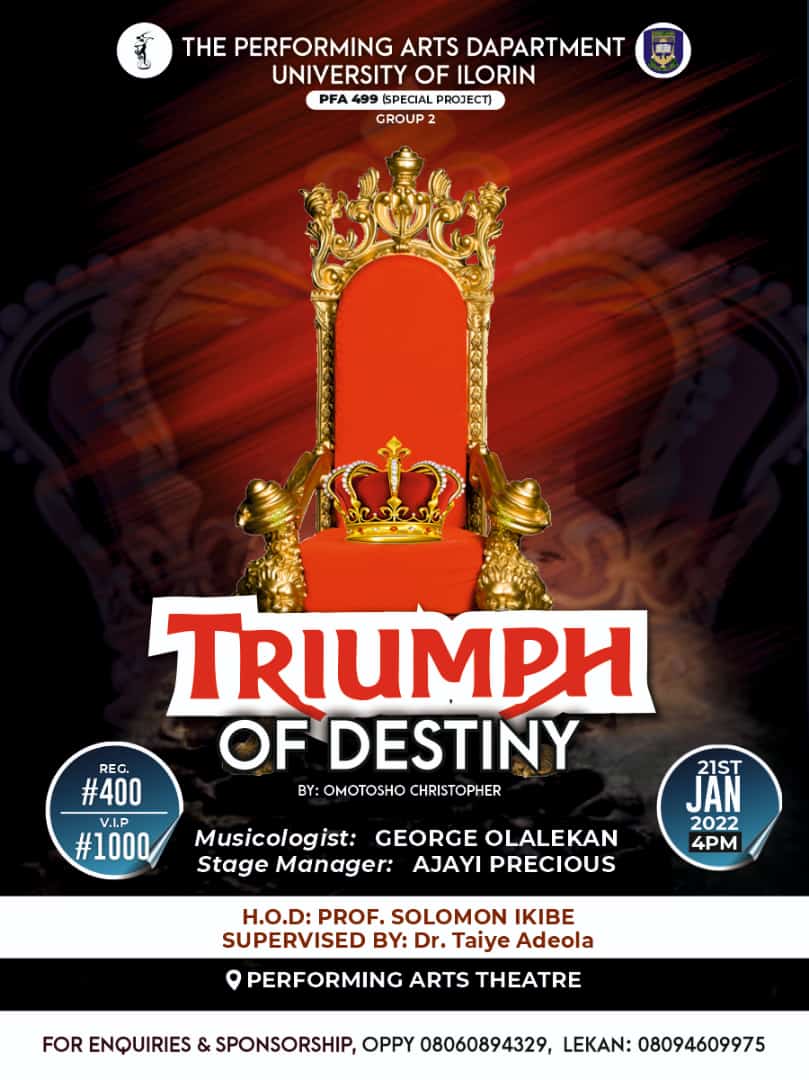 Performing arts students of the University of Ilorin (UNILORIN) are setting the academic community aglow from January 13 to 24 as they take their turn to showcase raw talents in drama, music, dance and acting during the presentation of their special group projects.

Lecturers, students and lovers of stage drama alike from Ilorin metropolis and its environs will have a swell time savouring loads of fun and excitement as groups from the Department of Performing Arts stage live performances at the PFA Theatre, UNILORIN campus 4pm each day. Gate-taking is N400 and N1000 for VIP.

The group presentation, which is a prerequisite course work, is designed by the university to assist the students hone their creative skills as well as promote talent development among the Nigerian youth.

Opening the showpiece on Thursday, 13 January is group one with an opera titled, Joseph and the Amazing Technicolor Dreamcoat by the duet Tim Rice and Andrew Lloyd Webber. It is a tale that follows the journey of a dreamer, Joseph, the son of Jacob and one of 12 brothers. He is given a coat of many colours by his father, which is symbolic of his favour and an object of his brothers’ jealousy.

The brothers decide to sell Joseph into slavery after initially plotting to have him killed. Convincing their father that his favorite son has died, they reveal his tattered coat and believe that they have got rid of him once and for all. From his homeland of Canaan, Joseph is taken to Egypt where he becomes the slave of Egyptian millionaire Potiphar and earns his trust. Managing his household, he soon has to ward off the affections of Potiphar’s wife.

He was lied against and thrown into jail. At prison, Joseph interpretes dreams. His gift of interpretation of dreams brings to the palace of Pharaoh, the king of Egypt, where he becomes the Prime Minister of the land.

Group seven will mount the stage on Friday, 14 January as they act Femi Osofisan’s Twingle Twangle (A Twynning Tale). This is a story centred on twin-siblings (Taiwo and Kehinde), who are always determined to prove who between them is more superior. Their incredible competitive spirit leads them on an adventure in which they later split. Each of them goes on to conquer villages and become rulers respectively.

Kehinde, being temperamental and arrogant, leads his village with an iron fist while his counterpart, Taiwo, decides to further the progress of his village through music and medicine. Their paths later cross and their competitive nature gets the best of them. The play ends with suspense about who of the two comes out triumphant.

It’s going to be a crunchy weekend when group four presents Arabian Nights, an adaptation of 1001 night stories by Ellen Johnston, on Saturday, 15 January. This epic collection of Arabian folk tales includes the popular story of the king of Samarkand.

Scorned by an unfaithful wife, Shahriyar, the king of Samarkand becomes heartbroken. Shahriyar chose to marry a new woman every day only to kill her the next morning. More and more innocent women die until one day Scheherazade, the daughter of the king’s top advisor, the vizier, offers to marry the king.

The vizier rejects but Scheherazade insists, all knowing that the night could be her last. That night, she requests the presence of her sister and tells a story that manages to be the beginning of dozens of stories meant to keep her alive. She tells the king a story every night with holding the ending till the next night and beginning a new one.

This went on for a thousand and one nights. Scheherazade weaves a deep narrative, linking together stories into a rich tapestry of old legends and new tales. As you might expect from such an ancient text, there are a variety of routes over the years to the same result of Shahryar falling in love with Scheherazade and removing the threat of daily death from her life. During this period, she tells the king many stories.

Next on stage will be group two, who will be performing Omotosho Christopher’s Triumph of Destiny, on Saturday, 21 January. The play is about the Yoruba’s belief in destiny as a compulsory fulfilment of divine script which man acts on earth.

In the play, Oriyomi with his wife escaped death during a war that destroyed the whole village. The couple escaped into an unknown deadly and terrible forest without hope of coming out alive. The duo encountered many troubles but there was always one help or the other at every point of the trials.

In the course of his journey, the number of Oriyomi’s wives increased to three and each of the wives contributed to his survivor at a point or the other in his journey. The climax of their trouble was the hope of finding refuge in Ogbonlaye village.

Wonder Child, a dance theatre by Dr. Taiye Adeola, will be staged by group 12 on Monday, 24 January. The story is that of a prophecy that a young baby will be born and the government shall be upon his shoulder and his name shall be called Wonderful, Counselor and Everlasting King. Will this prophecy come to pass or will it be cut short by Oba Adelenu in his community? The taste of the pudding is in the eating.

Commenting on the group presentation, a member of group seven, who also directed Twingle Twangle, Iyioluwa Akanbi, commended the UNILORIN management and their lecturers for the initiative, noting that it was a veritable platform for him and other students to hone their skill.

‘‘The benefits of this skill-imparting practical session cannot be quantified in monetary term. On behalf of my colleagues, I would like to express our heartfelt gratitude to the university management, our head of department, our project supervisor and lecturers for this awesome experience,’’ he said.